Monash Warriors take on the Croydon Rangers at Ranger Field

It was a weekend with a lot of hype.
A double header in Croydon on Saturday with the Barbs taking on the new Predators outfit coached by Mark Levin and the Warriors facing their old rivals the Croydon Rangers.
First up were the Barbarians in what was labelled as a “grudge match” be the South Eastern Predators. For the Barbarians, it was just another match against a team they have never faced before, no grudges held.
The first half saw an offensive struggle as both teams struggled to move the ball offensively.
It was a day where the Defense stood up and took control of the game.
FS Callum Marini was able to bring in 2 Interceptions and recover a fumble for the defense and the Offense were able to finally run on the Predators and get out to a 6-0 lead early in the 3rd. RB James Pho with another rushing TD for the season.
Barbarians QB Andrew Nixon struggled a little bit with passes just off the mark as he arrived to the game directly from the Airport after travelling back from Vietnam earlier that morning.
The Defense were able to hold off the Predators who gained some confidence in the final quarter and were able to run in for a touchdown with just under 2 minutes remaining in the game. LB Nick Murray was able to block the point after attempt and the scores remained tied at 6-6.
Barbarians OT Andrew Sher was voted as the player of the match by GVTV.

The Warriors were up next and it was a familiar face returning to Croydon when Barbarians new recruit RT Grantlee O’Sullivan was asked to step up and help out a Warriors team short on Offensive Linemen.
The Warriors started the game off well with a long passing touchdown by QB Heath Decker to WR Emanuelle Giannetta.
The Warriors Defense without their leader Ben Stokes struggled early on without being able to put much pressure on the Croydon quarterback. As the game grew, so did the confidence and the play of the Warriors Defense as they were able to gain sacks and also produce an impressive defensive stand in the 4th quarter with the Rangers 1st and Goal from 5yards out.
The defense were able to shut out the Rangers as a fumbled punt attempts saw the Rangers pounce on the ball and roll into the endzone for their only score for the day.
A great day was also had by the running backs as RB Luke Jackson ran by defenders all day and even had a score of his own.
Final score was 20-6. LB Kevin Reed was voted man of the match honours by GVTV.

Next weekend will see the Barbarians take on conference rivals the Western Crusaders in Corio on Saturday from 10;30AM whilst the Warriors take on the winless Melbourne Uni Royals from 1PM in Parkville.

Week 3 saw another double header in Endeavour Hills on Sunday. The Warriors took on the up and coming Dragons whilst the Barbarians faced a rebuilding Miners team.

The Warriors were first to hit the field on the weekend, and in great conditions for football were able to run the ball effectively with RB Luke Jackson scoring some big runs through the middle.

The Warriors were missing a few players due to injury and unavailabilities but were able to bring up some players from the Barbarians without any issues. OT Joel Fitzimmons, CB/WR Russell Howe and WR/RB John Iannou were all contributors on the day.

A good day meant QB Dom Dearman was able to use his arm quite a bit as well as he was able to move around the field and throw to all receivers on the park. First gamer WR Owen Hayden was able to hit the ground running and reel in a couple of Touchdowns of his own.

In the end, a well balanced effort and a solid 44-6 win over the Bendigo Dragons.

The Barbarians were up next to take on the home team Berwick Miners in what was anticipated to be the match of the week for the League. The Miners have struggled and look to be rebuilding under new HC Mark Petana and the Barbarians (missing a few players) were looking to close the gap between the old Div 2 teams and Div 1 teams.

It was the Barbarians who were able to step up first and take control of the game with QB Heath Decker avoiding defenders and spreading the ball to Wide Receivers Martin Moran & Zac Braun whilst RB James Pho was able to rush for some tough yards against a big Defensive Line from the Miners. The Barbarians through James Pho were able to put up 2 scores whilst the Barbarians Defense were able to control and put pressure on a nervous Miners Offense.

The Barbarians Offense were slowed a little in the second half and the Miners looked like they were able to kick into gear with an effective running game and able to punch in a score but trail 22-8.

A Final touchdown by RB Stuart Mackenzie sealed victory for the Barbarians as they become the first (previously Div 2 team) to deafeat a Div 1 team.

Next week will see another double header, this time in Croydon on Saturday. The Barbarians take on the strong South Eastern Predators which could possibly be the game of the round whilst the Warriors take on the Croydon Rangers from 1:30PM. 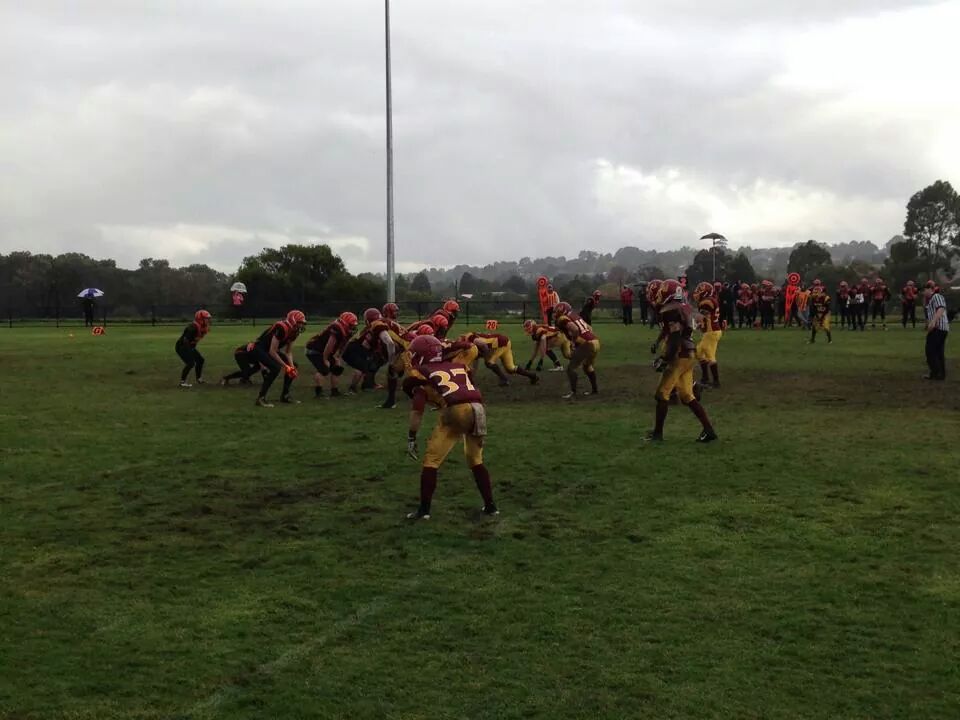 Week 2 saw both the Warriors and Barbarians heading down to Endeavour Hills for a double header.
The Barbarians opened the day against the Geelong Buccaneers who were coming off a convincing win against the Warriors in week 1.
With a number of missing players for the game the Barbarians were in for a very tough contest.
The Barbarians Offense never got going and the Barbarians Defense were on the field too often and too long.
The Buccaneers looked sharp with their running and passing game and were able to put up 3 scores in 3 series.
The Defense were able to adjust and found themselves able to turn the ball over for the next 4 series as the Buccaneers Offense staying on the field for those 4th down attempts.
Unfortunately the rest of the game was on the Buccaneers terms and the Barbarians went down 55-0 using 3 different Quarterbacks on the day due to injuries.

The Warriors got off to a slow start again facing the Berwick Miners, fresh off a come-from-behind win against the Royals in week 1.
The game was played in wet, cold and muddy conditions where throwing the ball was almost not an option.
QB Dom Dearman attempted several passes, but with each occassion the ball didn’t leave the hands right, falling incomplete each time.
The Warriors running game was not as productive as it usually is against a strong defensive line from the Miners.
In the final play of the first half, QB Dom Dearman attempted a long pass deep to WR Grant Guenther which looked to be intercepted, only to slip through the defender’s hands and into the lap of Grant Guenther for the TD and a 14-0 half time lead.
The second half was very similar to the first as it was a struggle in the conditions to pass and control the ball. There were many Center-QB Snapping fumbles with either the Center or Quarterback struggling to grasp the wet and muddy ball.
The Warriors were able to rush for 2 touchdowns in the second half. The first a 30 yard Touchdown run by RB Luke Jackson, the other a 5 yard Touchdown by QB Dom Dearman who scrambled after a broken play and stiff armed an opponent to the ground allowing him to walk in.
Final Score 30-0.

Week 1 has come and gone and it is the Barbarians, not the Warriors that start off the year with a win.
The Warriors went down to The Cove in Corio on Saturday to face the Buccaneers in the Vicbowl rematch.
In what started off as a shoot out, the Warriors Defense were able to score first with an interception returned for a Touchdown by Linebacker Alex Franklin.
The Buccaneers were able to fire back quickly with some hard running by RB Daniel Barnett and at Half Time the score was 22-16 to the Buccaneers.
The second half is where some holes started to show and the Buccaneers took their opportunities to put more points on the board. In cold and wet conditions, the Warriors were unable to gain any momentum to mount a comeback. Buccaneers defeat Warriors 49-22.

The Barbarians on Sunday travelled to Reservoir where they faces a Northern Raiders outfit that always put up a great challenge. All encounters by these 2 teams have been close and this was sure to be another hard fought out game.
The Defense stepped up first and dominated the first half, not allowing the Raiders to reach a first down forcing them to punt it away. The Offense led by new QB Andrew Nixon were able to utilise some great field position and put in 2 scores, one on a pass to WR Travis De Niese whilst Nixon decided to push his way through for the second on a QB Sneak.

The second half started strongly as Travis De Niese was able to return the opening kick off for a Touchdown.
The Raiders however responded back with 2 scores of their own and then the Barbarians Defense were able to step up once again to control the game. A Forced fumble by Linebacker Chris Patten (recovered by DT Jonathan Clarke) and interceptions by DB’s Glen Sodiatis and Emmanuele Chibs were able to hold off the Raiders Defense.
Another touchdown by RB James Pho sealed victory and the Barbarians defeated the Raiders 30-14 in cold and wet conditions.