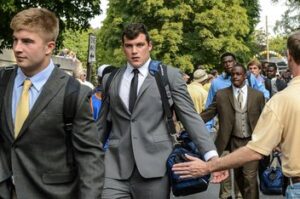 Monash Warriors player Adam Gotsis who is in his Sophomore Season with the Georgia Tech Yellow Jackets, at the starting Nose Tackle position, has continued to show improvement on his rookie season which saw him avoid being red-shirted.

Gotsis has been a workhorse up front for the Yellow Jackets and credits his Defensive Line coach Mike Pelton for getting him to where he is today, and also getting his Yellow Jacket teammates in position to make plays.

While the Yellow Jackets are on a 2 game losing streak after consecutive losses to Miami and BYU (both away games) he is hoping they can get back on track when they host Syracuse this Saturday on Hall of Fame Weekend/Heroes’ Day.

On a report in the ‘Sting Daily’ (Article can be found here) Gotsis said that his Defense could not get adjusted to the speed of the BYU offense which caused some issues throughout the game. “I think a lot of it was just us not getting lined up, not getting the calls in time,” Gotsis said. “It was kind of what we expected them to do, the same sort of thing that we planned for.

“I think the speed was definitely a bit faster than last week against Miami but I thought we made good adjustments and started getting the calls in toward the end,” he added. “It was tough there at the start and then we just had to figure out adjustments, which we did at the end, but it was a little too late.”

Adam had one of his best games of his career against BYU including 4 TFL (tackles for loss) for total -19 yards and 2 sacks (Both career highs). Gotsis now leads his team totals this season in TFL’s (8.0) and Sacks (3.0).

It was the top of the table clash that the Warriors were hoping would end with a different result. While missing a few players the Warriors headed down to Footscray to tackle the also unbeaten Crusaders in what was anticipated to be a close game.The Warriors were taught some lessons by their opponent and the Crusaders took advantage of their opportunities and come out winners 34-6.

Game MVP for the Warriors went to Harry Braun who brought in his first TD of the season and made 2 spectacular grabs in the game.

The team head back to the drawing board and are looking to bounce back against the Northern Raiders this Sunday.

The Warriors juniors came up against the Berwick Miners, who they defeated in the Preliminary Final last season before their eventual loss to the Rangers in the Vicbowl.

The Miners were looking to keep the Warriors at bay, but the Warriors were able to move the ball at will Offensively, and shut down what the Miners threw at them throughout the game.

Game day captain went to Pradeep Rentham, the 2nd year veteren who played a great game at center who was solid blocking on the O-line all day.

Crunch award went to Richard Lotriet for a well timed block and game MVP went to Matthew Samulis for some terrific running and 3 total Touchdowns for the game.

Next Sunday the Warriors will take on the Crusaders in Footscray. 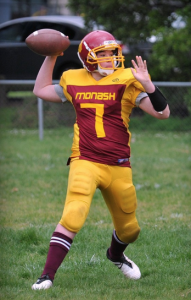 Week 1 saw the Vicbowl match up between the Warriors and the current Champs, the Croydon Rangers.

A big defensive effort saw the Junior Warriors beat the defending champion Rangers 28-20. After a slow start the Warriors Offense started to come together well in the second half and they were able to show the dedication put in the preseason with a hard fought win and a game that will only help the confidence of the young group.

The crunch award went to rookie Morgan Smith for a dominating game at D-line, while game MVP went to veteran Riely Powlesland for a terrific game at linebacker including 3 forced fumbles and 3 fumble recoveries.

A big congratulations also goes to Round 1 Game Day Captain Chris Gilliland! He was given the honour for his dedication in preseason preparations and it showed as he stepped up in his first game of Gridiron.

The team will be looking to build on that momentum against the Miners next weekend.