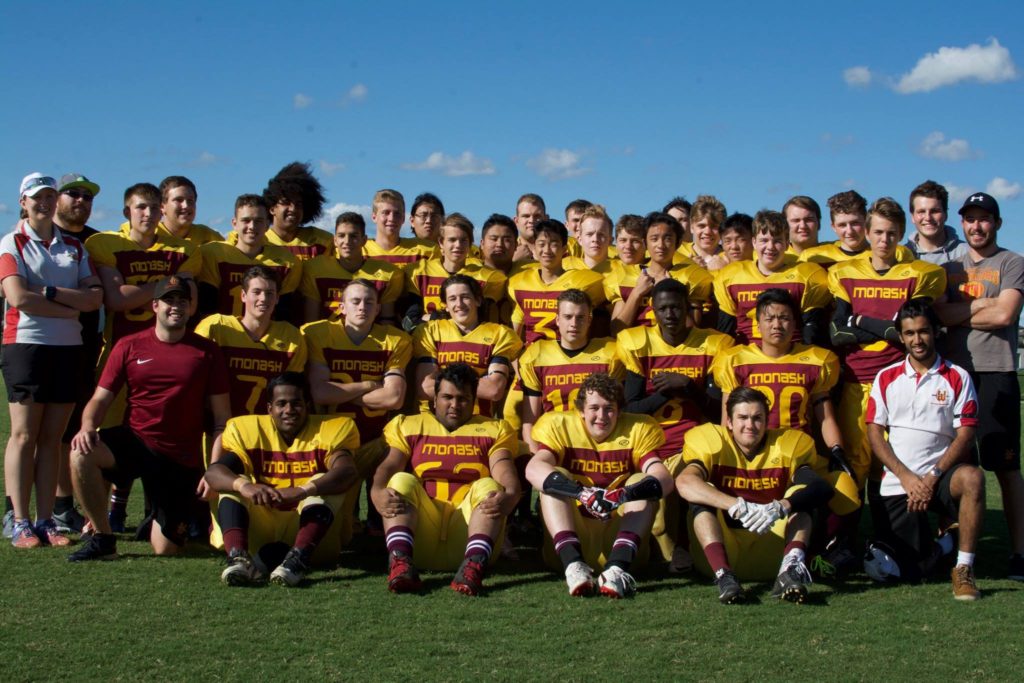 The final game of the junior Warriors 2016 season saw them in the Vicbowl with a matchup against the Melbourne Uni Lions. For the Warriors a victory would mean a fairytale finish to the perfect season, for the Lions it would mean history with a 3-Peat which had never been done at Junior level.

The two teams previously played in week 2 in a hard fought but mistake filled game in which the warriors were just able to hold on to win 12-6. Jonathan Keusgen was named the game day captain for the Vicbowl as a reward for his hard work, consistency and excellent performance, both on and off the field during the 2016 season and he delivered well with a combined Pre-game speech with Max Abrahams that fired all the boys up and got everyone ready to go. 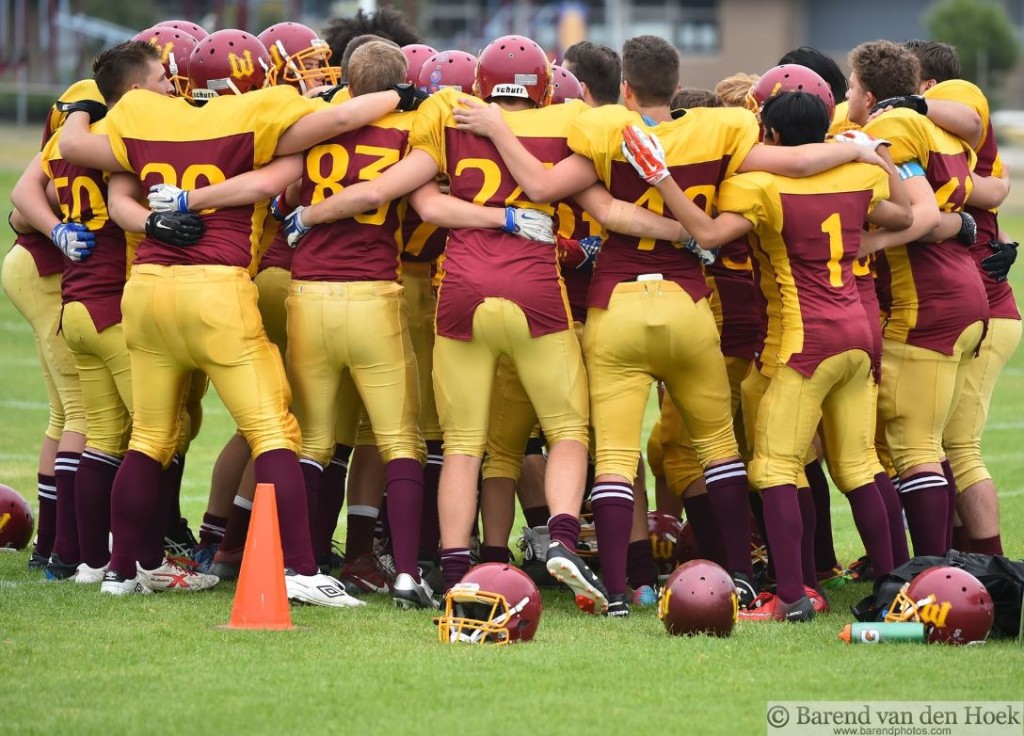 The game started off as expected, with both teams a little nervy on offense, with bad snaps, missed blocks and uncharacteristic fumbles that led to both teams having early three and outs on their first drives. However on their second drive of the game our high powered offense showed why they have been the highest rated offense of the year, driving the ball down the field with big runs by both RB Anton Maksoutov and QB Nick Whitehead. This placed us in the red zone and after a few plays we punched in the first score with a brilliant scramble from QB Nick Whitehead to bring up a 6-0 lead midway through the first quarter.

The defense again was stout against the run giving very little to the Lions offense, and when the Lions faked a punt on 4th and 5, Jono Keusgen stepped up and made a key tackle three yards short of the first down marker, giving the ball back to the offense. We wasted little time running a WR reverse to offensive weapon Ben McGaw, who proceeded to take it 50 yards basically untouched to the end zone. DL/FB Josh Deakin punched in the 2 pt Conversion to give the warriors a 14-0 lead at the end of the first quarter.

The second quarter began and this saw both teams struggle offensively with very few yards gained by either team. With less than 1 minute 30 in the half the lions decided they were content with a scoreless quarter for both teams and began to run the ball deep in their own territory. However our defense had other plans when deep in the middle of a big pile all of a sudden the ball popped out and CB Jed Melican scooped it up and ran it to the house for a momentum gaining play that put the warriors up 20-0. 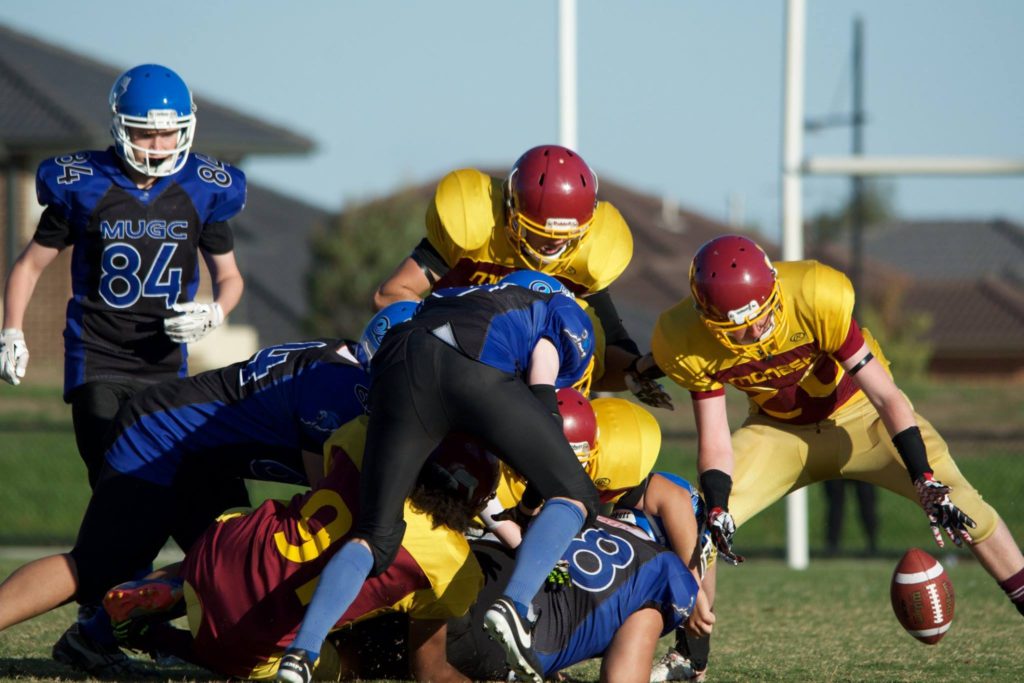 Jed Melican scoops up a fumble forced from a strip within the pile. (Photo courtesy of Bruce Rachon)

On the ensuing Kick Off, the Lions failed to gain possession of the ball due to a bad bounce that allowed WR Majny “Magic” Majing to make a “Crunch Award winning” massive hit to the legs of the lions player attempting to pick up the ball, forcing the ball to bounce away and be recovered by us. This gave us the ball at the Lions 40 yard line with 26 seconds left in the half. Unfortunately the Lions defense were able to make some key stops and the end of the first half saw the us leading 20-0

At the halftime break as coaches we couldn’t have been more proud of the team with the defense having played the best half of football they had seen all season and although the offense faltered in the 2nd quarter, they had started really well and had shown they could move the ball against what was considered by outsiders, the best defense in the league (of course we believed our defense was the best in the league). 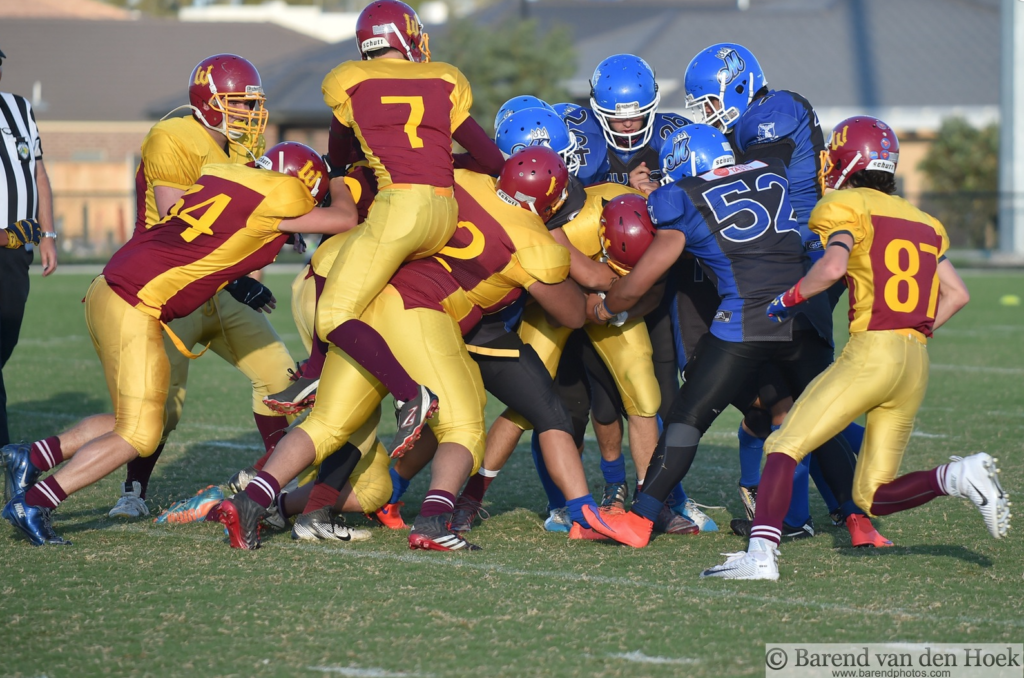 The Warriors were committed to fighting for every inch towards victory (Photo courtesy of barendphotos.com)

After a quick break the 3rd quarter began and our defense continued their dominance forcing a quick 3 and out and giving the ball back to the offense. After a quick consultation with assistants Kieren Marini and Matt Morgan, we decided that we wanted to absolutely sink the hopes of the Lions early in the 2nd half, so on the first play of offense we ran a WR reverse Pass with WR and Backup QB Jordan “JVB” Van Buuren throwing a deep bomb to receiver Ben McGaw. Unfortunately the ball was misjudged by Ben and fell incomplete. After that unsuccessful attempt we went back to basics with some power running by RB Anton Maksoutov and FB Henry Malouf, and we marched the ball down the field to the 1 yard line. After a few plays and a few lost yards we eventually extended the lead with a play action pass from QB Nick Whitehead to WR Ben McGaw on the edge of the end zone. The Warriors again punched in the 2 pt. conversion with a short pass to Anton Maksoutov extending their lead to 28-0. 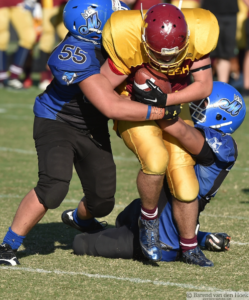 The scores remained unchanged until midway through the 4th quarter when the Melbourne Uni Lions QB connected on a deep pass to the slot receiver who made an outstanding one handed catch and outran the rest of the defense on his way to the end zone to put the lions in the board 28-6.

On the next drive QB Nick Whitehead was suffering in his own words from, “the worst cramps of his life”, and had to come off the field. This put Backup QB Jordan in and he continued where Nick left off, driving the ball down the field and connecting on a TD pass to TE Vish Sivakumar, who had been a constant presence in the end zone all year. Since I had promised him I would, I allowed DL Josh Deakin who was in his final year of juniors to go in at QB and run a QB sneak into the end zone to convert to 2 pt attempt and extend the lead to 36-6.

With less than 2 minutes to play the Lions had run out of options and in attempting to pass deep down the field were intercepted by LB Dmitri Maksoutov who returned it to the house to put the icing on the cake of our Vicbowl win and extend the lead to the eventual winning margin of 42-6.

The Lions tried to make something out of nothing with a lateral on the ensuing Kickoff which was fumbled and recovered by the Warriors special teams unit which had been outstanding all year long. This allowed me to get all the top age players onto the field for one last time together. So with DL Jomo Kigotho and Ben McGaw at WR, DL Josh Deakin and G Edmond Jin at Guard, WR Jackson Crook at RB and Vish Sivakumar at TE we entered victory formation and knelt the ball to end the game.

Huge celebrations began with the excitement of winning our first junior Vicbowl in 7 years, with WR Ben McGaw and QB Nick Whitehead absolutely covering me in Gatorade. 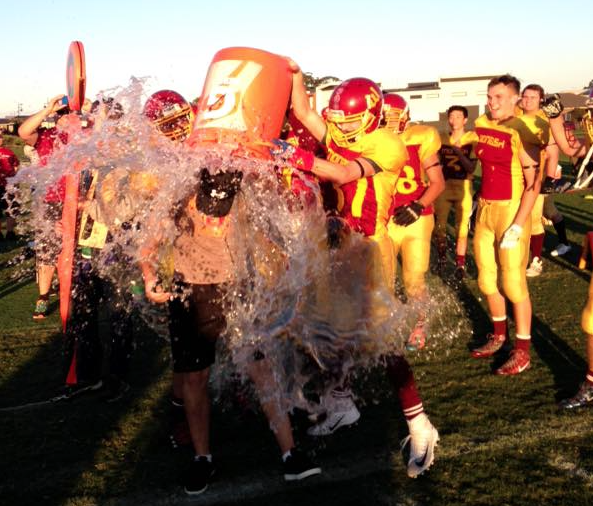 After the game all the coaches decided that although there were many standout players, in a game in which the defense dominated the game MVP was awarded to LB Dmitri Maksoutov, as he had an amazing game all day with an estimated 20+ tackles and the pick six that sealed the game. WR Ben McGaw won the official award for Vicbowl MVP for his efforts on the day with over 100 all-purpose yards, and multiple big punt returns. 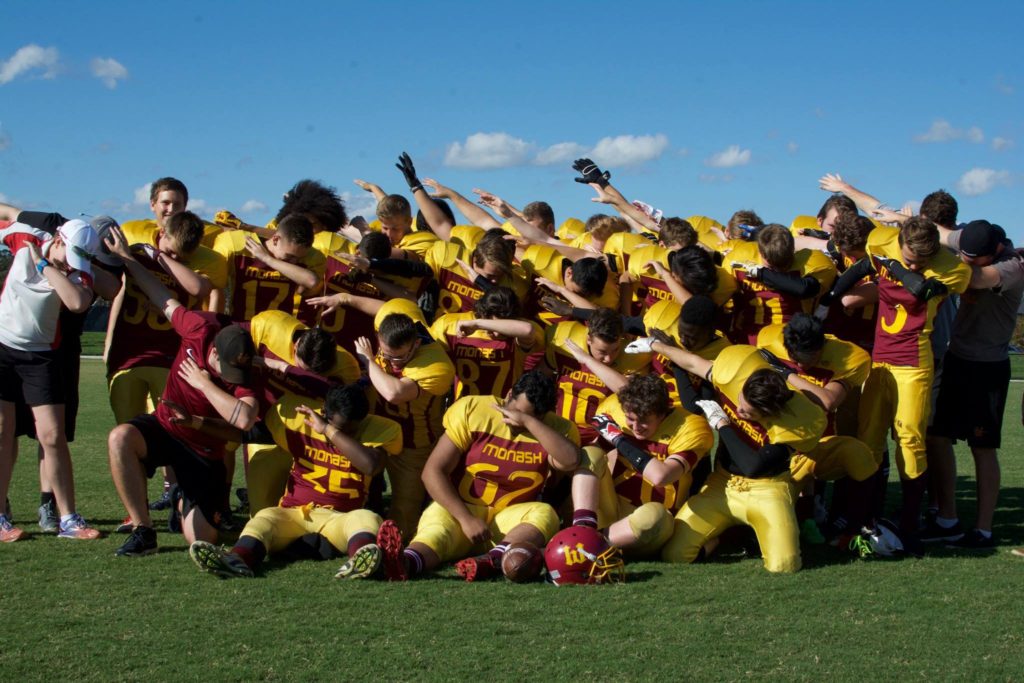 The undefeated season was capped off with a massive victory in the Vicbowl in what will go down as one of the best seasons the Junior Warriors have had up to date. We couldn’t be prouder of the team’s performance all year and we hope to see all eligible players return to defend the title next year as well as all the top age players stepping up to seniors and having instant impacts at the senior level in both Barbarians and Warriors.