The Monash Warriors headed down to Footscray on Sunday to tackle the Western Crusaders in a game that would cement the overall #1 seed for playoffs with a win and a Norther Raiders loss.

The Western Crusaders were a team struggling to find wins this season but still a determined team willing to finish the season on a high note. They had lost two of their games this season by less than a score and had those have gone the other way, they would have been in contention for the #4 seed.

The day did not start of well for the Warriors as several players found themselves running late and the team captain Pradeep Rethnam had forgotten his game pants at home. Game MVP then went to Senior John Le who had brought some pants to the game straight from training at Monash University in Clayton.

The Warriors were determined to fix their slow starts from previous games however found themselves concerned after all the issues prior to the game beginning. Coach Callum Marini tried to fire up his team prior to kick off and the Offense listened. 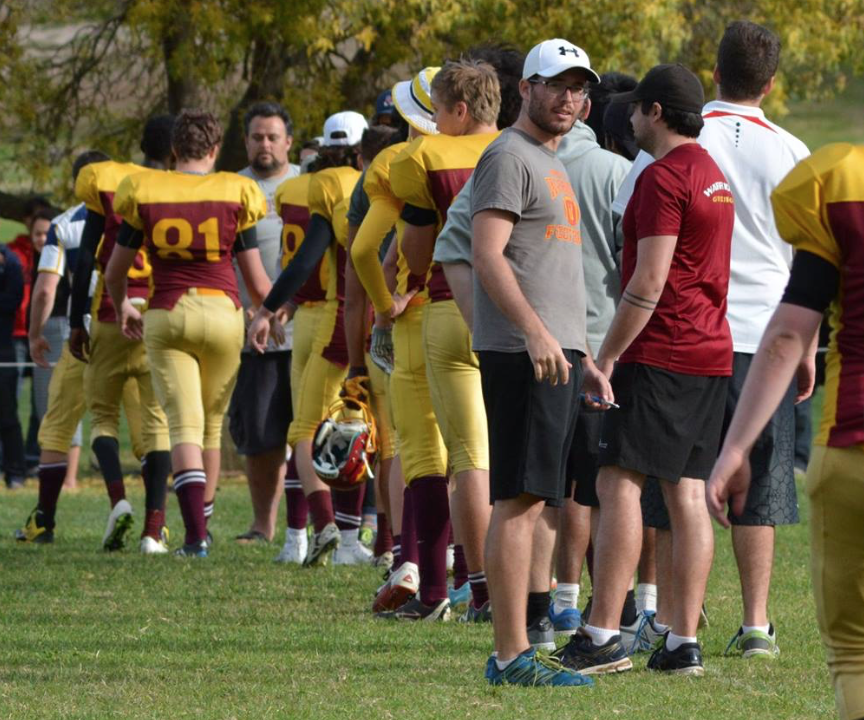 Determined to cause an upset the Crusaders scored on both their first two drives of the game coming out in formations that caused headaches for the Warriors. Defensively the Warriors had not seen these formations meaning they had not prepared for it and had no experience on how to counter it. It wasn’t until coaches Marini and Sires made changes to formations and assignments that they were able to control the game.

Special teams has played a pivotal role this season with the Warriors and their standout returner Benjamin McGaw was back at his best torching the Crusaders for 3 return touchdowns on the day, two coming from Kick offs and the third from a Punt. The speed and ability to make people miss has been exciting to watch but it is the teamwork of the 10 players around him on the field making key blocks which allows McGaw to find those gaps to turn into scores. 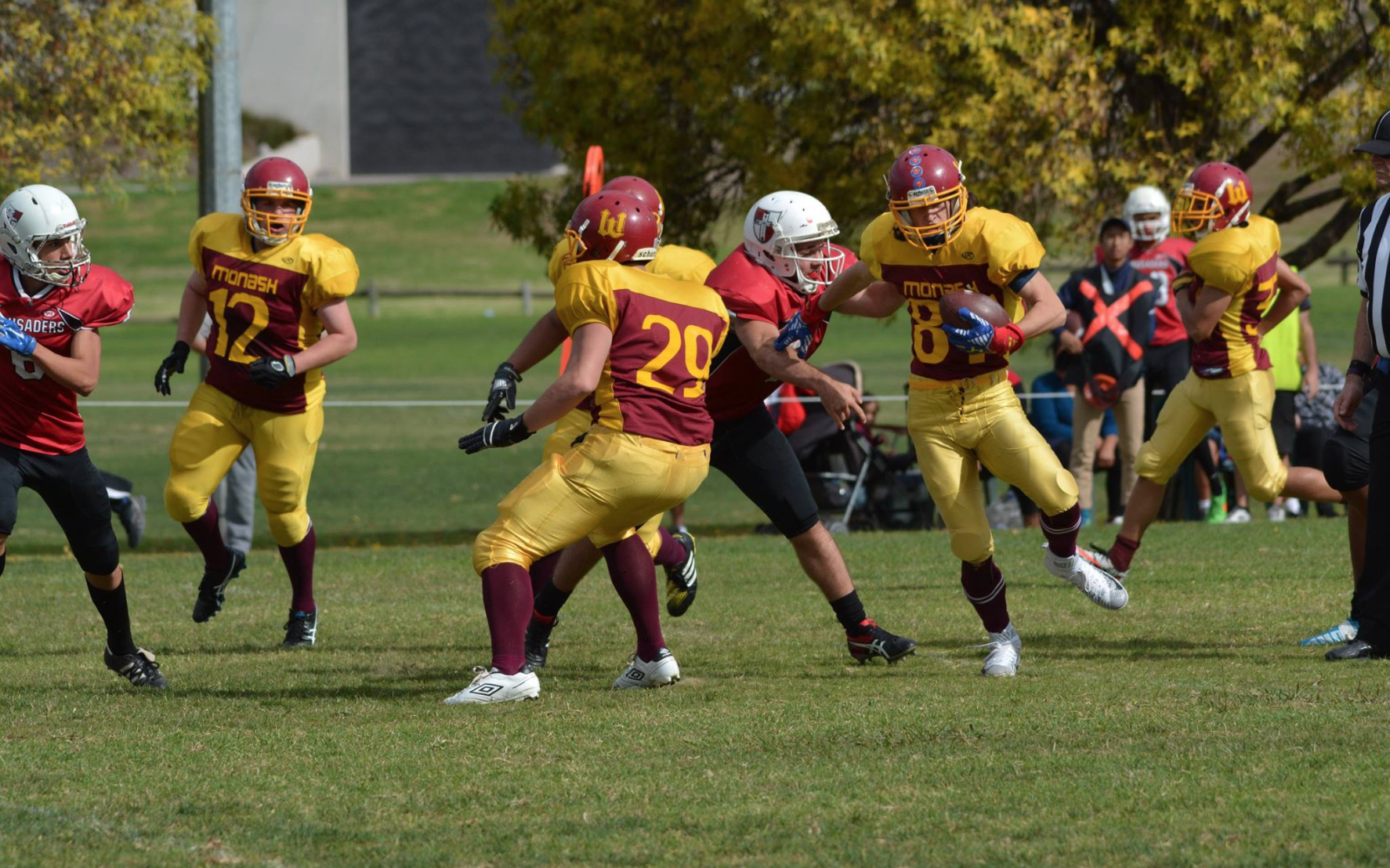 Running Backs Anton Maksoutov and Brian Huynh had big days combining for over 150 yards rushing and a touchdown each whilst Tight End Vish Sivakumar continued to impress with a touchdown of his own on an Out route.

Joining the scoring party were Jono Keusgen and Dmitri Maksoutov who both scored defensively on interception returned touchdowns. That sees the Warriors Defense & Special Teams combining for 5 touchdowns on the game and the Warriors ended up easily accounting for the Crusaders running out 70-14 winners.

Crunch award went to Josh Deakin who delivered a massive hit from FB on a goal line 2pt conversion.

Next week sees the season finale where the Warriors will travel to Reservoir on Sunday 17th April and face an improving Northern Raiders team that have cemented a playoff spot for the first time in their young Junior history.

The Warriors can’t afford to slip as form at this time of the year is crucial. Whilst they have cemented top spot after the Northern Raiders lost to the Melbourne Uni Lions in the lead up game in Footscray, the Warriors still need to be on top of the game if they wish to complete the perfect season.

The Warriors will face either the Packenham Silverbacks or Croydon Rangers who are both fighting for 4th position and hope to defeat them to face either the Northern Raiders or Melbourne Uni Lions who will face off again in the semi finals.

Get down to Reservoir and support the Warriors in their quest for the perfect season. 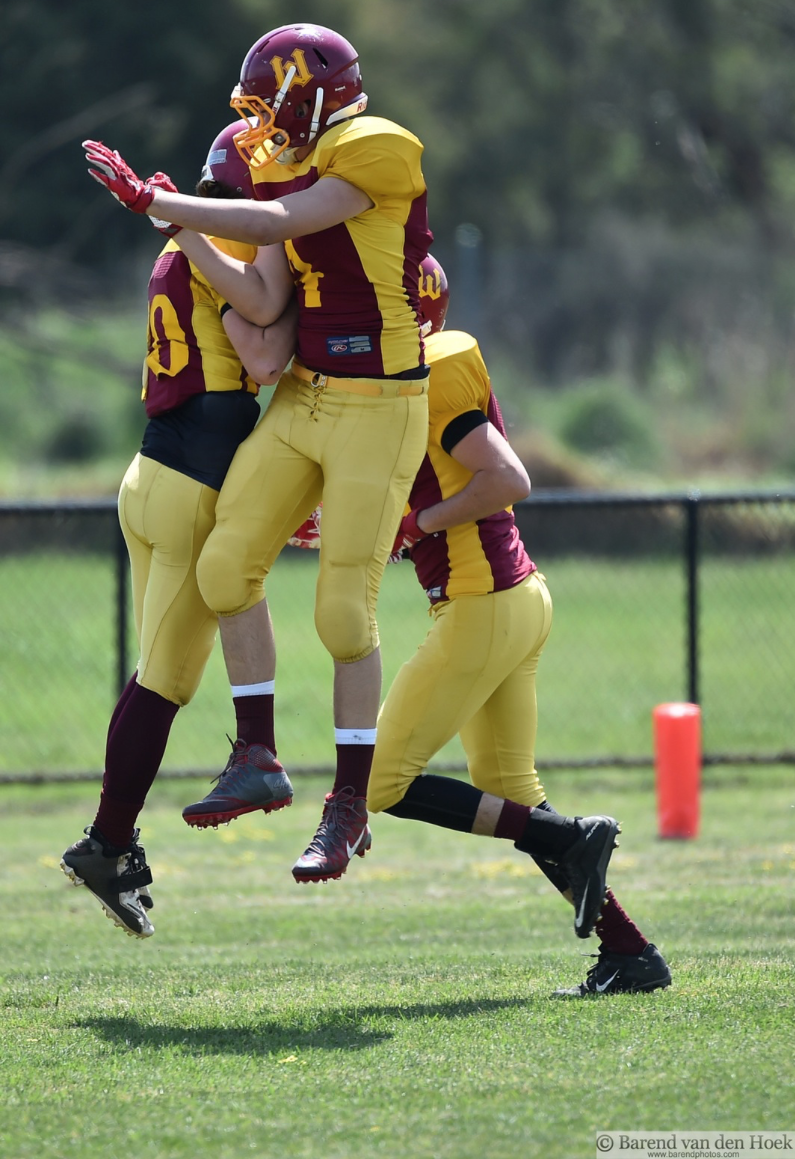 It was the battle of Clayton on Saturday when the Warriors travelled up the road to meet their new neighbour the South Eastern Predators for a clash of bragging rights in Clayton in the Gridiron Victoria Under 19 competition.

With both teams fresh from a league wide Easter bye week this was going to be a battle to the end and that is exactly how it started with both teams in hot form. The Warriors led by QB Nicholas Whitehead were able to march down the field with each possession and score but all the good work would be undone when the Predators took advantage of some sloppy defense by the Warriors scoring on the first offensive play in two of their first half series.

The inability to finish tackles or wrap up their opponents kept the Predators level with the Warriors in the opening half. The Warriors are used to fast starts but they have relied on their defense to keep the lead and stop opponents from putting up big scores against them however Saturday told a different story and with a slim 32-26 lead at the half it was evident a change needed to be made.

Head Coach Callum Marini and his brother and fellow assistant Kieren Marini asked more from their defense at the half. Not much more could have been asked from the offense as they scored on each possession they had in the first half but the defense were sloppy, lazy and full of mistakes. A switch needed to be flicked and indeed it was in the second half.

Game MVP Jomo Kigotho was moved from Defensive End to Outside Linebacker, Defensive Lineman Joshua Deakin was moved opposite Kigotho to Outside Linebacker also and Dmitri Maksoutov exploded in the second half landing the days crunch award after being challenged by his coaches at the half to beat out his brother Anton Maksoutov who ran all over the Predators at Running Back and folded a Predator ballcarrier in half on a kick return. 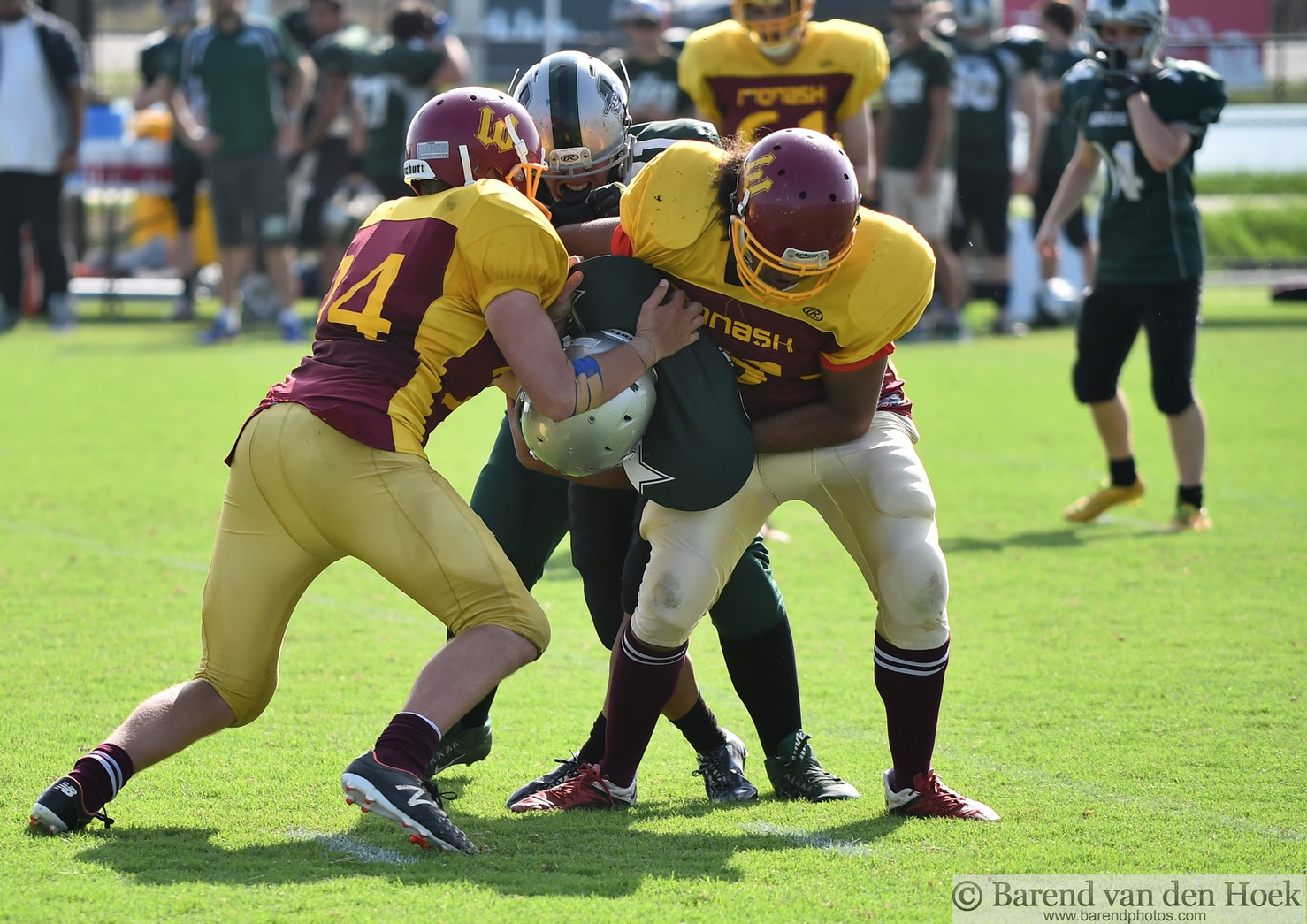 The Defense were back to their usual game plan and attached the Predators at will. Standout performers Kigotho, Deakin and Dmitri Maksoutov were also joined by Nosetackle Nick Hughes in stuffing the run game and physically overpowering a Predators team who knew the game was getting away from them. A second half shutout was produced and the Warriors ended the game winners with a 54-26 scoreline.

Offensive weapon Benjamin McGaw was a standout yet again with two touchdowns on the day, one being from a kick return whilst the other was a Wide Receiver reverse. Tight End Vish Sivakumar was able to reel in a 20 yard pass from Whitehead and Deakin was also able to punch in a score of his own with a run from fullback, but the outstanding performance by Running Back Anton Maksoutov was the difference maker for the day as Anton was able to run all over the Predators for 4 touchdowns and over 100 yards rushing. 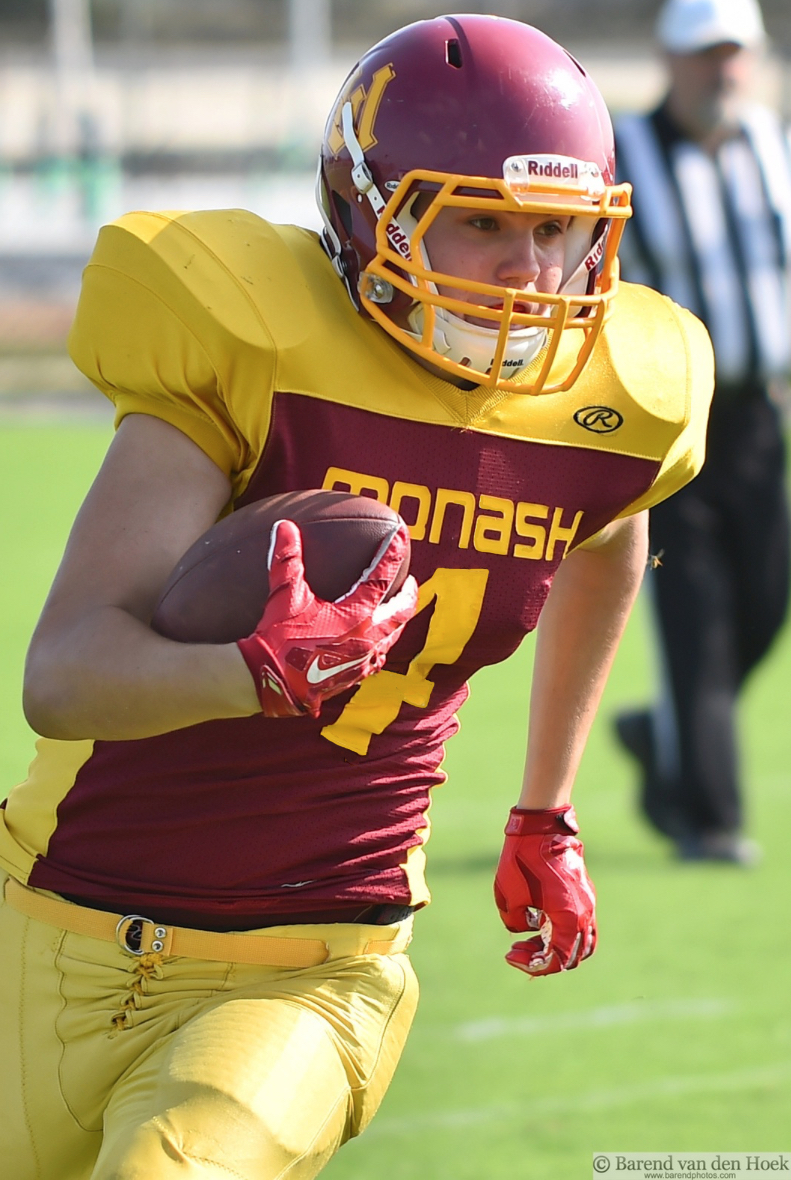 The Warriors face the Western Crusaders on Sunday 10th April with kick off at 1:30PM at Henry Turner Reserve, Maribyrnong Blvd Footscray. The Crusaders and Warriors have a history of close games with multiple draws and the rest decided by less than a score. The Warriors are undefeated after 7 weeks and will need to improve on today to keep that streak going.