Warriors & Buccaneers line up for the National Anthem (Photo courtesy of barendphotos.com)

With Gridiron Victoria streaming the game on their youtube channel, all of our fans were able to catch the game no matter where they were in the world.

The Warriors would be appearing in their 9th Vicbowl in 10 years and hoping to become Champions for the 8th time in 10 years. Their only Bowl game that they did not participate in was when the Geelong Buccaneers defeated the Croydon Rangers for their very first Championship.

The Stage was set! the past 2 Championship teams going head to head in a new rivalry which could have gone either way. The Warriors set up multiple nights of film, walkthrough’s, full training sessions and strategic planning. The Warriors were focused, they were driven, they were prepared and they were just waiting for kickoff.

With perfect weather in Bendigo and a great atmosphere filled with flame throwers and a large scoreboard displaying the game the Warriors were almost ready to go, the only thing missing was their superstar Wide Receiver/Quarterback Heath Decker who arrived by Helicopter after winning a final in his Aussie Rules team. Decker was quick to run onto the field and get changed on the sideline with 5 minutes before kick off, the Warriors were then ready to take on the Buccs.

The Warriors won the toss and received the opening kick off and charged forward on their first series running the ball at will behind a massive Offensive Line that had been outstanding in the lead up. Warriors score first on a 20 yard Touchdown Run by RB Luke ‘Whitey’ Jackson and jump out to an early 6-0 lead. That first series would see him rush for 62 yards on 5 carries, an amazing effort.

It was then the Warriors Defense to take the field and they didn’t disappoint. With the Buccaneers 2nd & 1 after a quick out pass, the Warriors were then able to force a turnover on downs thanks to a tackle for loss from DT Tobias Brucksch-Domanski and a pass deflection by DE Keegan Wikaire. The Warriors Offense would then take the ball from their own 34 yard line and drive the length of the field again. 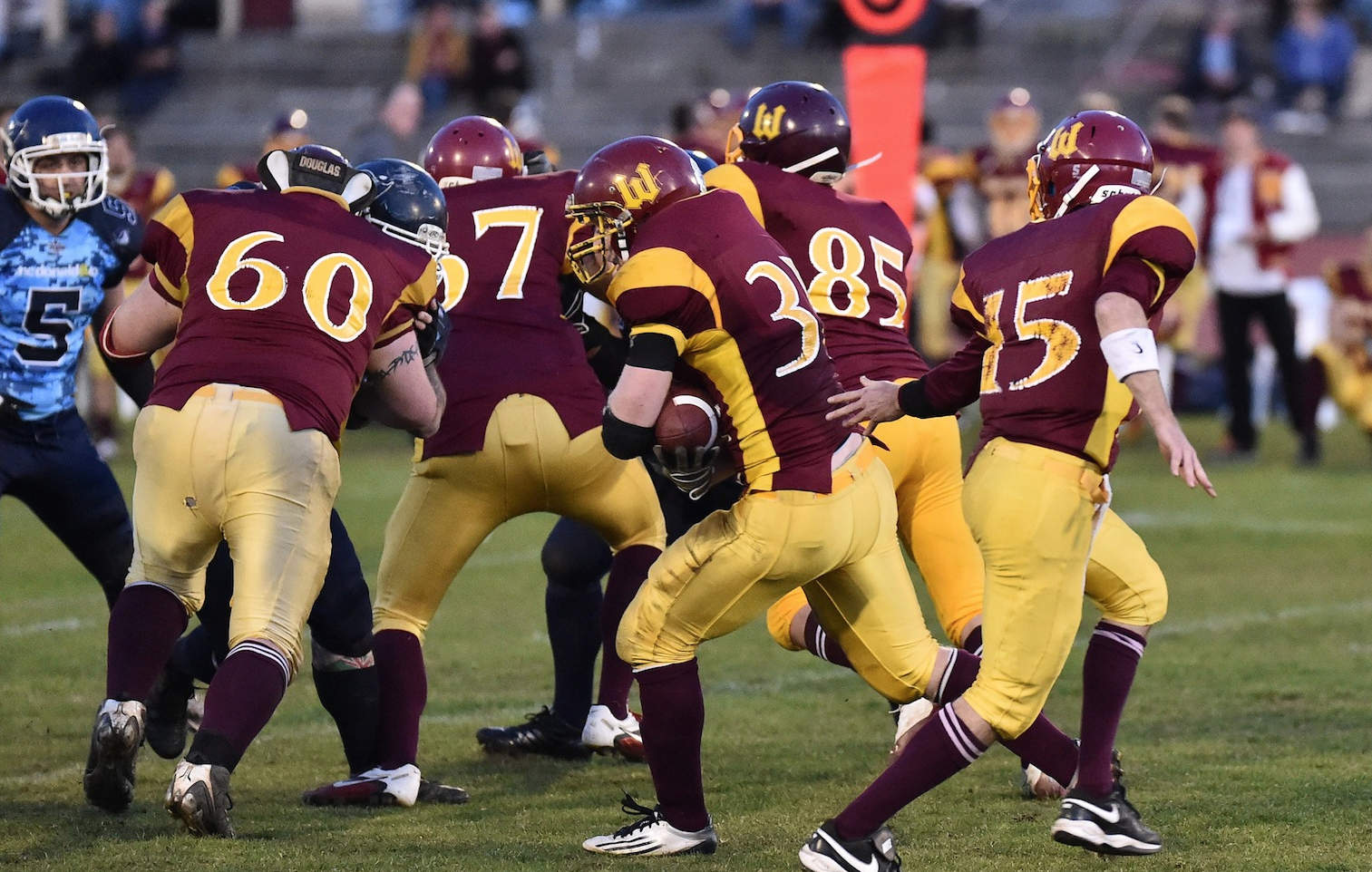 Just like their first series, the Warriors Offense were looking to inflict damage to the scoreboard and move further ahead, and they were able to with RB Luke Jackson setting up a play action pass for QB Dom Dearman who was able to hit WR Heath Decker for the 20 yard TD Reception. With Kicker Liam Armstrong kicking the point after, the Warriors would take a 13-0 lead leading to the Quarter Time change of ends.

The Second Quarter was much the same as the first, the Warriors Defense held the Buccaneers Offense and the Warriors Offense pounded away on a Buccaneer Defense that looked helpless against the strong running game led by RB Luke ‘Whitey’ Jackson. Jackson was able to score twice in the second term with a 2 Yard TD Run and then a break away 36 Yard TD Run. At Half Time the score was 27-0 to the Warriors.

Coach Ralph Maggio is not the type to be speechless and he admitted to the group he had a speech prepared to drill the team and try to motivate them, however he was expecting a much closer game that what it was currently. He told his troops to keep pounding away and to continue fighting to the end as all the Buccaneers required was a small opportunity to get back in the game and the lead would be wasted.

Those words were feared to come true as the Buccaneers took the opening possession of the 2nd Half and were able to work their way through and eventually score a 5 Yard TD Run to Buccaneers RB Jereme Russell. The score 27-6.

The Warriors Offense then came onto the park and drove down into the 10 but on 4th & 1 were seen to be stopped and the Buccaneers gaining momentum. It was up to the Warriors Defense to then take some control and ensure the Buccs didn’t drive them down the field to add another score, and they did exactly that. The Buccaneers went 3-and-Out and looked to Punt however the snap sailed over the Punter’s head into the back of the Endzone for a SAFETY. Warriors extend their lead 29-6 and thats how it remained at the end of the 3rd Quarter.

Buccaneers RB Daniel Barnett was able to punch in a 4 yard TD run with RB Jereme Russell running in the 2 Point Conversion, but the night belonged to the Warriors who moved the ball into Field Goal Range and on 4th & 3 were able to have Liam Armstrong come on to kick a 37 Yard Field Goal and secure Victory and the second Warriors 3-Peat in 7 years.

The team celebrated their victory and jumped on a bus back to the Elephant & Wheelbarrow in St Kilda who are the team’s major Sponsor for 2014 and have been for the past 3 seasons. RB Luke ‘Whitey’ Jackson was awarded the MVP with his 293 Yard, 3 Touchdown performance. 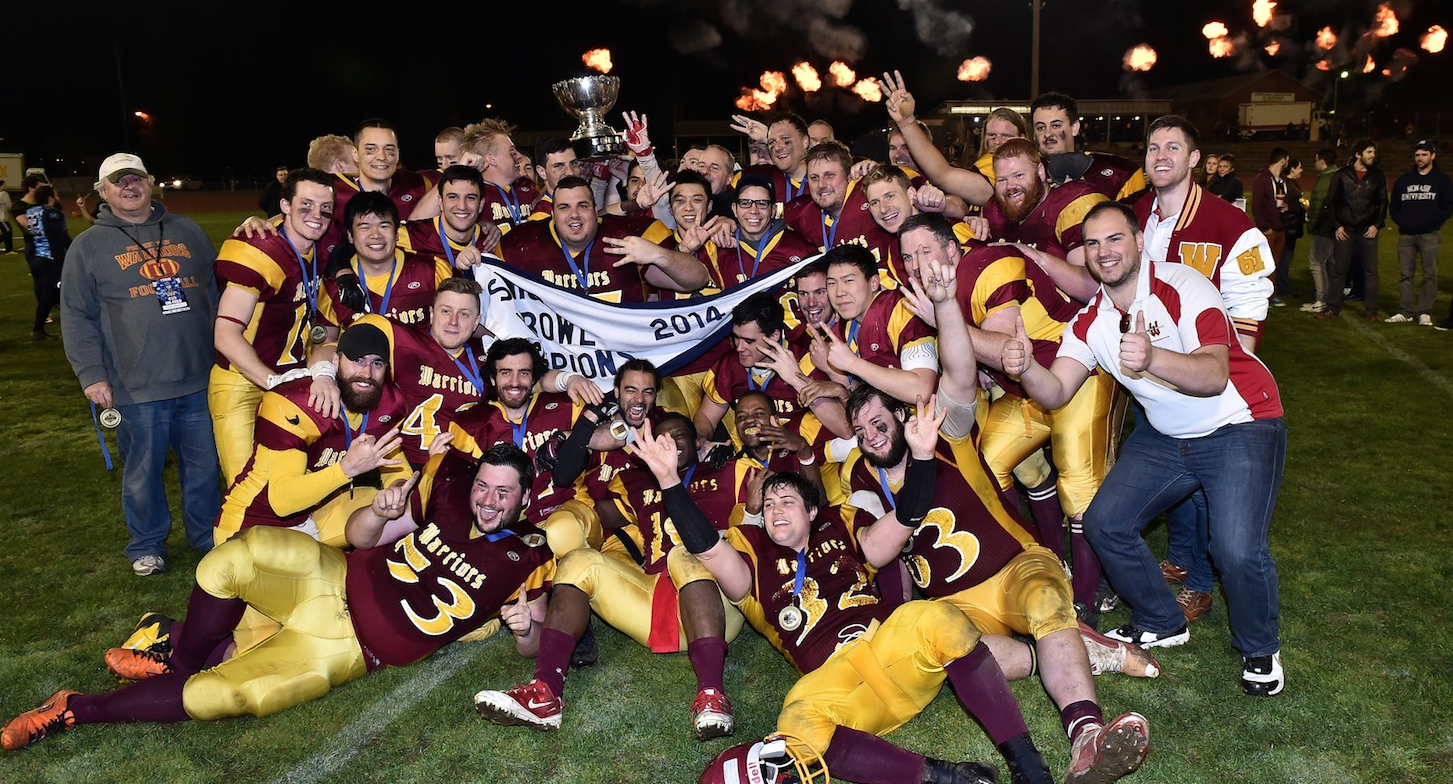 The Warriors entered the game as underdogs and the performance by the Offensive Line and Running Backs was one for the ages. A total dominating performance the team is very proud of. 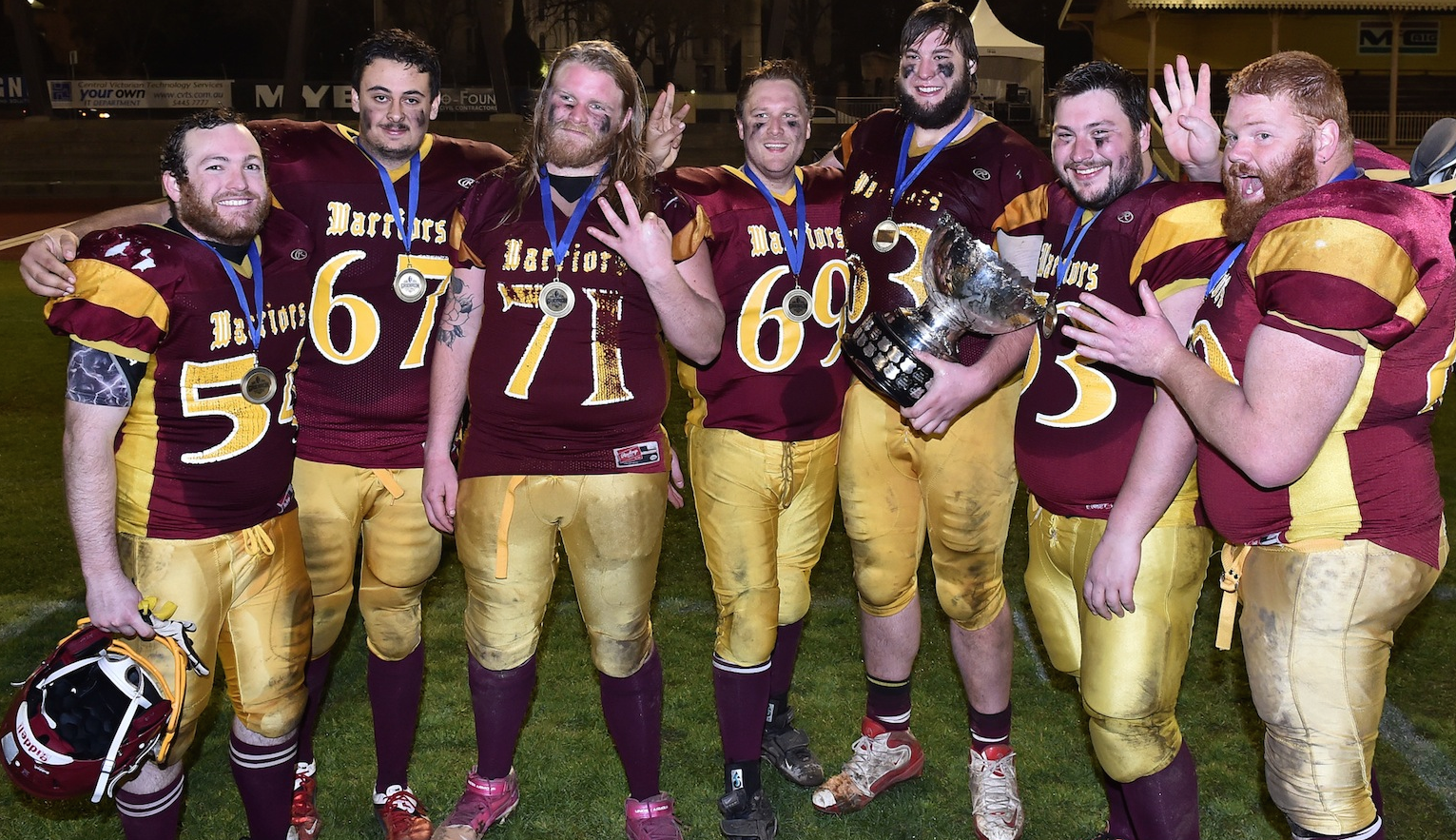 The unofficial Statistics for the game were as follows: