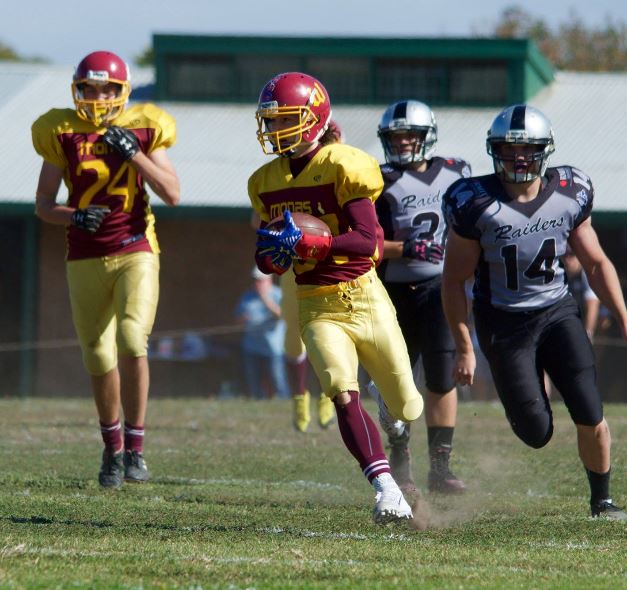 The Warriors headed down to Reservoir on Sunday for the final game of the regular season and a chance to finish the season undefeated leading into Playoffs. A young determined Raiders team were hoping to grab bragging rights in this contest as the teams would face off against each other next week in the semi final. This would be the first time the Raiders Juniors would be participating in playoffs and they let everyone know that.

The Raiders brought some arrogance to the game because of their new feat and that was apparent with an onside kick to start the game.

Not showing to be unsettled, the Warriors Offense took the ball to the ground and pounded at the Raiders. The speed option looked to work with RB Anton Maksoutov punching in the first score of the game and getting the Warriors off to a great start.

The Defense came out also to a great start forcing the Raiders to punt the ball away allowing the Offense to march the field again all the way to the redzone. The Warriors were this time unable to run in another score and the Raiders force the fourth down turnover. Possession changed without any result for both teams and looked to be a defensive battle all day.

The Warriors however were able to break that deadlock with a passing touchdown to TE Vishu Siakumar who has been a great redzone target, only on this occasion it wasn’t from his quarterback, it was from WR Jordan Van Buuren. 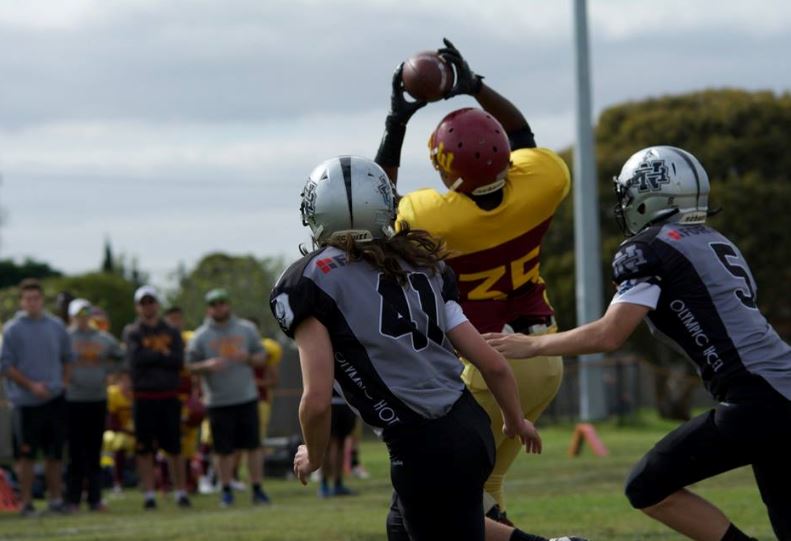 The Raiders were then able to hit straight back with a returned touchdown to keep within a score of the Warriors 14-6.

The Raiders rallied behind their defense but the Warriors kept moving the ball eventually scoring with another rushing touchdown by RB Anton Maksoutov. With time about to expire for the first half, the Raiders pull off a touchdown run as time expires and trail the Warriors at the half with a respectable 22-12 scoreline.

The Warriors brought in RB Brian Huynh as a change of pace running back and he dominates the Raiders for not only his first series in the game but the whole second half. Brian would end up with game MVP for the Warriors with a 2 Touchdown performance and over 100 yards rushing (all in the second half).

The Raiders defense seemed to run out of legs as they couldn’t keep up with the Warriors Offense in the second half. The Warriors scored as they liked with Huyny punching in 2 and Offensive Weapon Benjamin McGaw scoring a touchdown on a reverse,

The Crunch award went to Anton Maksoutov for a massive hit on kick return, pictured below. 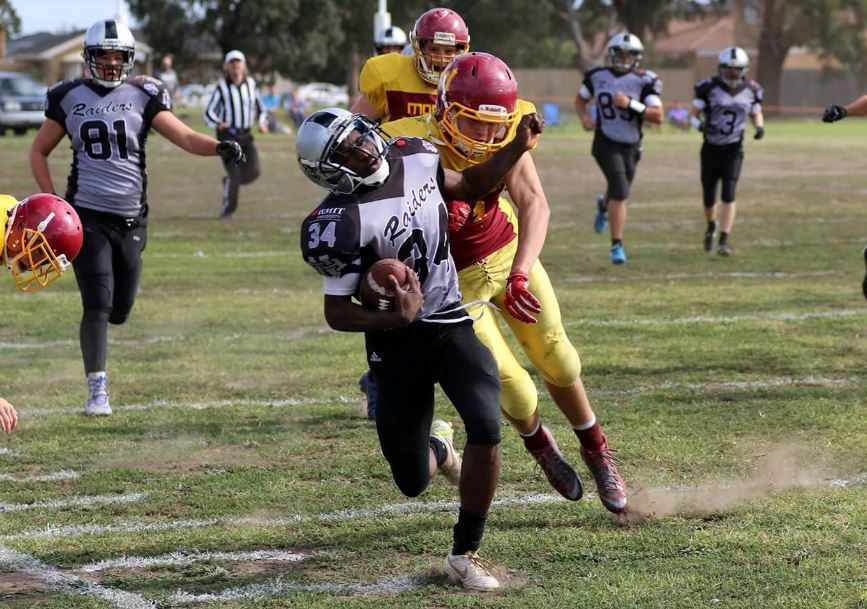 The Warriors head to Parkville on Sunday with Kick Off @ 1:30PM against the Northern Raiders which has turned into a grudge match after some online posts by the Raiders. The Warriors will come out firing! Get down there and support your Warriors! The job is not done, 2 more wins required!