On Sunday 24th April in front of a great crowd in warm conditions, the Warriors faced a young determined Raiders outfit with a spot in the Vic Bowl on the line.

The Warriors came in undefeated and faced a team they defeated only 7 days earlier whilst the Raiders entered their first ever final full of confidence in the hope they could adjust to last week’s loss and turn the tables.

The Warriors knew the tricks the Raiders had up their sleeve and the defense came out firing! The Raiders first offensive series had 2 rushes for 0 yards and an incomplete pass, and before you knew it they were punting.
Offensive Weapon Benjamin McGaw picked up the bouncing punt and returned it 30 yards to the Warriors 28 yard line and setting up the Warriors with excellent field position.

Enter QB Nicholas Whitehead who had been in excellent form of late and staring down the barrel of a 3rd and 12 decided to take on the Raiders for a 30 yard rushing TD. One series, one touchdown, Warriors lead 6-0 with 7:41 in the first. 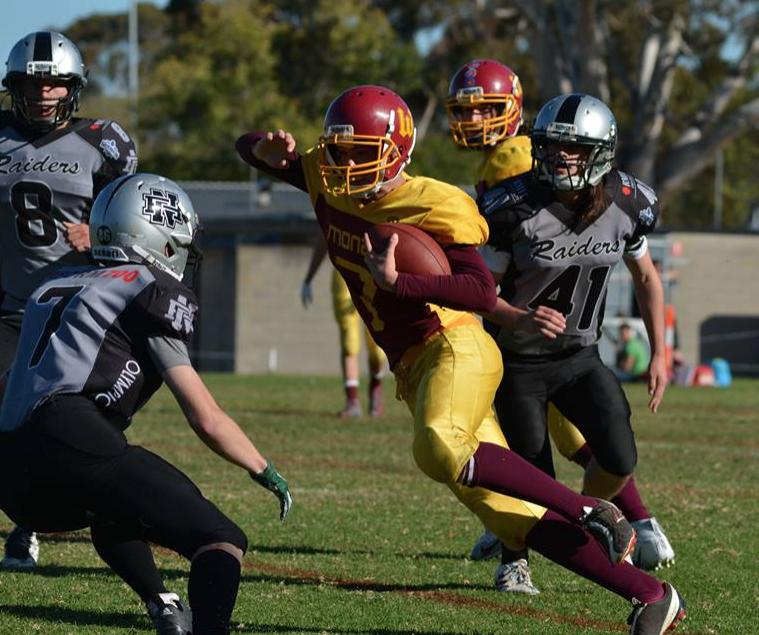 The Warriors defense entered their second series just as well as they did with their first forcing the Raiders to another rush for 0 yards, and incompletion and a 7 yard loss due to a Raiders fumble. The game was firmly in control to the Warriors and with Benjamin McGaw back ready to return another punt, all the pressure was square on the Raiders early and that showed with a fumbled snap and a punt of -10 yards, the punt sideways and out of bounds thanks to some great pressure by the Warriors.

The Raiders needed to step up and their defense finally came to the rescue. The Warriors were threatening to score again deep into the redzone by the Raiders forced a turnover on downs and more importantly to them, forced a change in the momentum of the game.

The Warriors defense continued their dominance but their offense started to show signs of fatigue turning the ball over with a fumble (controversial inadvertent whistle) and then Whitehead threw an interception right at the defender. The Warriors defense were able to recover a fumble of their own with just 40 seconds remaining in the first half however nothing was able to come of it with time running out ending the first half 6-0.

The Warriors regrouped at the half recovering in the shade, getting their fluids up and with Coach Marini and his coaching staff making minor adjustments they were back ready to go for the second half.

In their previous match up, the Raiders opened the game with an onside kick, something the Warriors thought may occur again so they set up for the second half and sure enough the Raiders kicked the 10 necessary yards straight to a waiting Anton Maksoutov. With great field position to start the second half, Whitehead looked to take the Raiders on again and from the very first play of the series scrambled for a 40 yard touchdown run along the sideline in front of the Warriors crowd. Henry Malouf was able to punch in the 2 point conversion and the Warriors were able to extend their lead to 14-0 with 9:48 remaining, only 12 seconds into the second half.

The Raiders hit back immediately with an 80 yard end around with the Warriors defense over pursuing and the Raiders runner dodging tackles to find open field and the endzone to bring the score back to 14-6.

The Raiders looked to get the ball back again lining up for an onside kick, this time chipping over the top of the Warriors front line and successfully diving on the ball to get possession and switch the momentum again in the game. They stretched the field with some lateral running and looked dangerous however a fumbled handoff allowed OLB Kyle Katiferis to pounce forcing yet another turnover deep in the Warriors own territory. 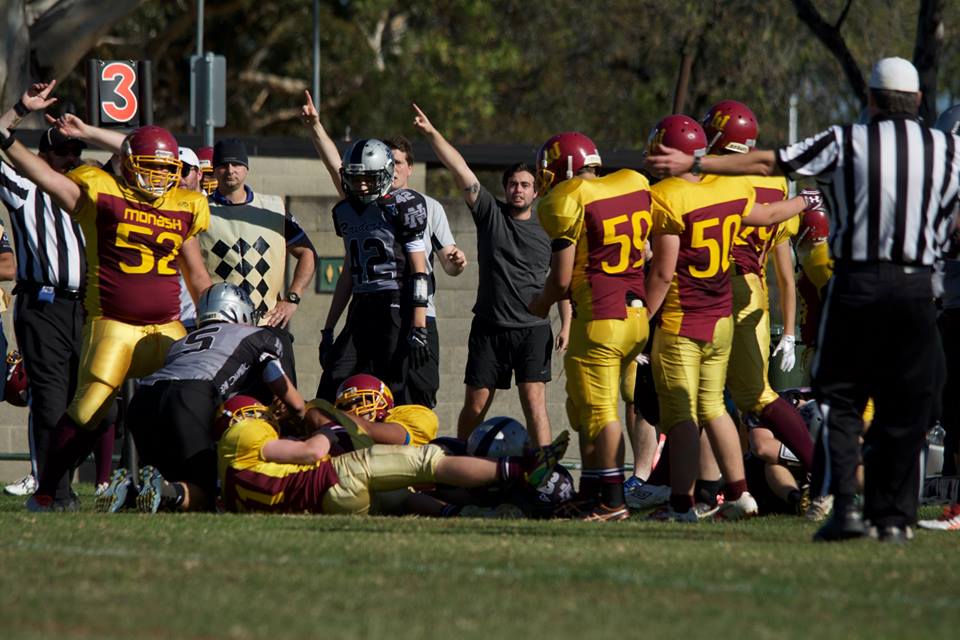 The Warriors were hoping to give themselves some breathing space but the Raiders defense continued to shine forcing a change of possession and then with a catch and run over the middle, they were able to run it in for another score and come within 2 points of the Warriors with a 14-12 scoreline.

A delay in the game due to an unfortunate injury to OLB Kyle Katiferis (broken ankle) saw the Warriors come together and work together looking for that victory.

The offense were lead brilliantly by Whitehead and Maksoutov who switched from running back to tight end and ran the perfect route finding the back of the endzone for another touchdown. 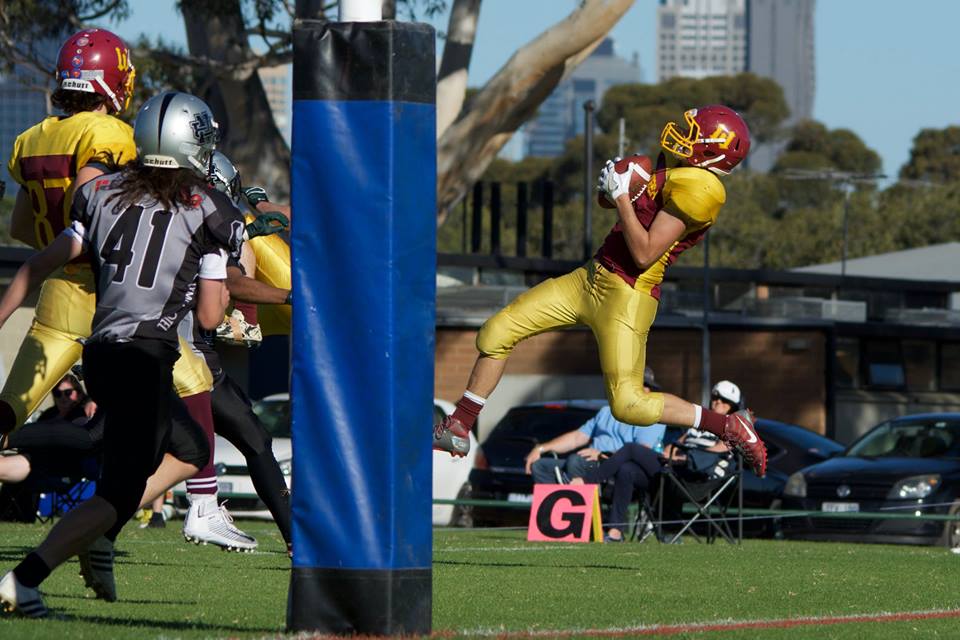 With the end of the third quarter and Katiferis off to hospital in an ambulance the Warriors looked poised and confident enough to finish the game strong. Anton Maksoutov just ran the perfect route for the previous touchdown and torched the Raiders on the ground also with a 40 yard run dodging the Raiders putting the game away extending the lead to 30-12 with 6:36 remaining on the clock.

Both defences tried to hold strong for their clubs but it was the Warriors capitalising with game MVP Whitehead scrambling for his third touchdown on the day and securing the win with 2:32 left and a lead of 36-12.

The Warriors were able to kneel the game out, extend their unbeaten streak and secure a spot in the Vic Bowl against the Melbourne Uni Lions.

Kick Off will be at 3:00PM on Saturday 30th April at Heatherbrae Reserve, Arena Parade, Officer.

One More Win – Required for the perfect season

One More Win – For a lifetime of memories

Get down and support the Warriors and enjoy a cracking game!